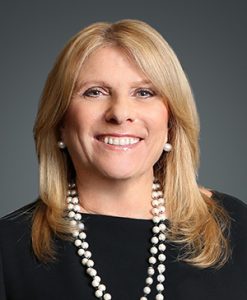 Recognized as an industry game changer, Lisa Lutoff-Perlo has spent her 33-year career holding progressive positions in Royal Caribbean Cruises Limited (RCL) until appointed President and CEO of Celebrity Cruises in December of 2014. She is the first woman to ascend to the C-suite to lead one of RCL’s global brands. Celebrity Cruises is a division of RCL valued at $22.7B and is the world’s second largest cruise line operator with 66,000 employees on land and at sea.

The first female President & CEO of a publicly traded cruise line on the NYSE (RCL,) Lutoff-Perlo leads the category defining, multi-billion-dollar brand with 13 ships sailing to 300+ global ports on all seven continents with each ship’s crew representing over 60 diverse nationalities and cultures. Based in the Miami headquarters while global driving business with offices around the world.

During Lutoff-Perlo’s four-year leadership, Celebrity Cruises has doubled operating income, accomplished double-digit ROIC, double-digit yield growth, significantly improved NPS and employee engagement results – all achieved without any increase in capacity until Q4 2018. This remarkable brand growth has paved the way for the RCL Board to approve the investment in new Celebrity ships worth over $5B and the first new ships in ten years. These achievements, along with earning unprecedented recognition and awards for innovation, breakthrough technology and giving back to the global community, showcase Lutoff-Perlo’s unique leadership capabilities and her drive for shareholder return.

Driven by her motto, “We must innovate to elevate,” Lutoff-Perlo’s cutting-edge innovations extend throughout the company. She has steered consumer insights through use of AI platforms to cutting edge digital apps, resulting in Celebrity consistently being hailed for being ahead of the industry. Fast Company awarded Celebrity Cruises one of “The World’s Most Innovative Companies” for 2018. Lisa has broken the cruise mold and elevated Celebrity into a lifestyle brand

Lutoff-Perlo has led and launched multiple, next-generation cruise ships including Celebrity’s lauded Solstice Class, which was hailed as re-defining the cruise industry. Lutoff-Perlo’s drive for industry firsts has led to unique features, such as a half-acre of real grass on the top deck and a unique cantilevered shower in the top suite, extending out over the side of the ship.

Lutoff-Perlo’s vision to build new ships that are game changers continues with the launch of the transformational Celebrity Edge. Forbes proclaimed Lutoff-Perlo the “force behind the world’s coolest new cruise ship” for Edge, which launches in December 2018 with Nobel Laureate Malala Yousafzai as the godmother.

Lutoff-Perlo concepted and lead the strategy to engage with a team of over 500 designers to bring the Edge vision to life. Lead designers and architects include; the legendary Kelly Hoppen, MBE, Tom Wright, Patricia Urquiola and Scott Butler, with celebrity designer and Edge Ambassador, Nate Berkus, to help tell the story of Edge. Architectural firsts were also led by Lutoff-Perlo, including the Magic Carpet, the incredible engineering feat is the world’s first cantilevered, floating platform that reaches heights of 13 stories above sea level and Edge Staterooms with Infinite Veranda where with the touch of a button, the entire living space becomes the veranda, letting guests walk out to the water’s edge. These staterooms feature the latest in design and technology and are 23% larger than Solstice Class veranda staterooms.

Industry insiders said these industry-first innovations could “never be done” and Lutoff-Perlo proved them wrong again. Global press coverage for Celebrity Edge to date is over 1.9 billion impressions, with headlines that rival that of an Academy Award winning film and buzz.  Pre-launch Edge bookings have broken brand records twice over, with demand continuing to drive pricing. The pre-launch success of Edge has secured Lutoff-Perlo a commitment to build additional Edge Class ships in the next five years.

Lutoff-Perlo also seized the opportunity to introduce the first and only luxury ship to be designed and built exclusively for the fragile Galapagos ecosystem. Celebrity Flora will make her debut in May 2019 and break with conventional thinking with unique features immerse guests in the destination with an outward facing design, onboard lab and naturalist lounge, observatory, all-suite accommodations and environmental partnerships that give back to the Galapagos and its endangered wildlife.

Lutoff-Perlo is leading Celebrity’s recently announced $530-million investment in fleet modernization by engaging an all-star lineup of engineers, architects and designers to support the five-year transformation dubbed The Celebrity Revolution.

In addition to leading Celebrity Cruises, Lutoff-Perlo heads up RCL’s Global Marine Organization, ensuring that the corporation’s $25-billion fleet of 51 ships run safely, smoothly and efficiently across all RCL brands for six-million guests per year.  She is the first woman in the industry to do so.

Known for her strategic and financial expertise, Lisa’s influence on the organization has been historically felt far beyond the reach of the positions she held as VP Onboard Revenue, SVP Hotel Operations, and EVP Operations as she ascended towards the C-suite. Often the only woman on the senior leadership team, she always led for bottom-line impact and results first, while knowing she was a role model paving the way for so many behind her.

Her background in operations, sales and marketing have earned Lisa a deep knowledge of delivering award-winning bucket-list destination experiences, a service-first culture, distinctive onboard activities and events, as well as a 360° approach to design, culinary and accommodations. Her success in brand building and differentiation generated significant demand across all channels, extensive consumer insights and first of its kind experiences for the two largest brands in the RCL corporate portfolio, Royal Caribbean International and Celebrity Cruises.

An avid champion for diversity and inclusion, education, STEM and an advocate for young women, Lisa leads by example by standing-up for what she believes in while encouraging others to do the same.  She has challenged and changed the conversation around cultural and gender equality in the maritime industry, having ignited many initiatives to raise the percentage of female officers on the bridge and landside.  Lisa proudly hired the first female American captain, the first female African bridge officer, and the first female Ecuadorian captain, removing barriers for all to thrive.

Her commitment to opening up the world through travel has brought unprecedented recognition and awards to Celebrity Cruises for its impact on the industry, the environment and the global destinations sailed.  Under her leadership, Celebrity has received hundreds of awards for service excellence, best premium cruise company, best in category, most LGBT friendly, travel company of the year, best value, responsible tourism and corporate responsibility from the prestigious Food & Travel Mag, Wine Spectator, Fast Company, LGBT Cruzie Awards, Conde Nast Traveller, U.S. News and World Report, Travel Weekly, Cruise Critic and many, many more.

Celebrity Cruises has partnered with a number of impactful organizations to make a difference in the world in the areas of girl’s education (Malala Fund,) sustainability and environment (World Wildlife Fund,) STEM (Columbia University, FIU, University of Miami,) gender equity (C200,) service excellence (Forbes Travel Guide), and expanding the footprint of women in the maritime industry (Mandela Washington Fellows/IREX.)

Lutoff-Perlo has a guiding value of giving back and helping others to succeed.  She enthusiastically lends her leadership to a number of global philanthropic, business and women’s organizations as a board member and volunteer on a local, national and international level including Best Buddies Int’l, The Malala Fund, United Way Broward, Columbia University School of Professional Studies, Miami Beach Pride and others.

Lutoff-Perlo has received numerous awards for her contributions to gender equality, diversity and inclusion, the travel industry and the business community including; SFBJ Ultimate CEO Award, Mosaic Award for Lifetime Achievement, NSU’s H. Wayne Huizenga College of Business & Entrepreneurship Hall of Fame, SFBJ Most Powerful Woman and 25 Most Influential Women, Miami-Dade Philanthropic Investment in the Community Award, Sapphire Award from Cleveland Clinic and Florida Blue among others.

Lisa believes in using her story to the C-suite to inspire others, including young women.  She is often quoted as saying, “Teach your daughters less about fitting into glass slippers and more about shattering glass ceilings.”

For more information, go to: celebritycruisespresscenter.com/lisalutoffperlo