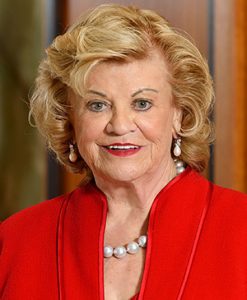 Lorraine Thomas is a philanthropist and a woman of action. After graduating from Bellarie High School, she moved to Fort Wayne, Indiana, where she met and married David Thomas in 1954. The Thomases moved to Columbus, Ohio where they raised their five children, and where most of her grandchildren live.

In 1969 the first Wendy’s restaurant was opened, and over the years David and Lorraine built that one restaurant into a successful national and international company. Not content to merely succeed in business, they also believed strongly in giving back to their communities, both in Ohio and in their adopted home of Fort Lauderdale.

In 1983, they donated the lead gift to build the Arthur James Cancer Hospital at Ohio State University. In 1992, the Dave Thomas Foundation for Adoption was established and was recognized by President George H. W. Bush in a White House ceremony. In 1993, Lorraine and David chaired the capital campaign to establish the I. Lorraine Thomas Children’s Emergency Home and Family Support Center for the Children’s Home Society in Fort Lauderdale

After David’s passing in 2002, Lorraine continued the couple’s commitment to the Dave Thomas Foundation, as well as the Welling School in Ohio, the Nationwide Children’s Hospital, and St. Jude Hospital in Memphis.

Lorraine is a longtime supporter of Nova Southeastern University (NSU), the BrowardCenter for the Performing Arts and Women In Distress. Her commitment to our community also includes major support of Junior Achievement of South Florida with the naming the Dave & Lorraine Thomas JA BizTown at JA World. She is a founding member of JA’s Circle of Wise Women and their signature event JA World Uncorked.

Lorraine’s life revolves around her children, family and friends. She fills her days with fun and laughter, and in between, she spends much of her time supporting the charitable causes in which she wholeheartedly believes. Asked to be a speaker at numerous events, Lorraine shares her philosophy, “You have to share. Get involved. If you have the means give, give big. If you have the time, roll up your sleeves and jump in”.